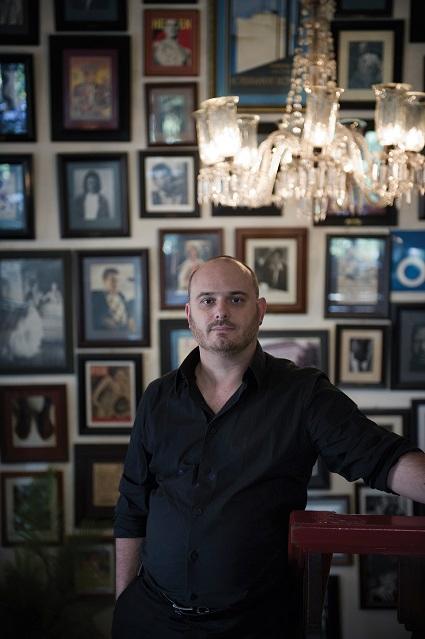 “It got me in a theatre-hairstylist’s studio at the end of 70s: At the early age of eleven I was being dressed up as a little Santa Claus for a Christmas party. Seated between many different kind of wigs, being able to watch the hairdresser washing and styling a real hair and able to smell the unfamiliar sent of the mastix resin that he used in order to stick the facial hair onto my face, I was experiencing the awesome transformation from little boy to old man. This event had such an impact on me that from then on I wished to become a make-up artist myself. So as a schoolboy I began to assist make-up artists in their work for local drama-groups. At the age of 16 I began an apprenticeship as a hairstylist and during this period I set up my first small make-up artist studio within my parent‘s appartment. I spent my freetime styling the actors of local theatrical groups and enjoyed making up carnival goers. I also got the opportunity to work as a freelancer for regional TV stations, later also for RTL and many other national broadcasting stations. After finishing my apprenticeship as a hairstylist I founded ATELIER BASSI in Buchs in 1990. I specialized in high-quality wigs, make-up art-work for theatre, film and TV and started to sell special effects make-up. It didn’t take long for Atelier Bassi to be granted distributionship for Switzerland and Italy for the Dutch theatre cosmetic brand GRIMAS. At the same time I developed a special aluminum case for make-up artists, which was fitted with a sophisticated drawer system that became very successful.

I was convinced that there was a market for reasonably priced theatre and film wigs without compromising on the level of quality. This idea  brought me to Asia for the first time. The local company culture, the large productions and the tremendous speed of workmanship was impressive. Several visits to one of the best and well-known wigproduction companies in Korea lead to the first cooperations. Gradually more and more of my business partners were moving their production to China. Together with my former partner, Giuseppe Abbate, who worked for Atelier Bassi from 1991 until 2010, I was subsequently forced to find new suppliers. We eventually found a hairprocessing company in Surabaya (ID) and also found a wig manufacturer in Bali. From then on Atelier Bassi started to have its products manufactured in Indonesia. Almost every two months we flew to Java and Bali, supplying the companies with new hair and new orders. All finished wigs were handcarried back to Switzerland.

To be able to react more flexibly to market demands after a couple of years we decided to start our own wig production company on the tropical island of Bali. The local Balinese Nengah and Wayan were trained and instructed in Switzerland into the art of wigmaking and the company for manufacturing wigs was opened in the centre of Bali. The international break-through came in 1997 after attending the worldwide’s first international exhibition for make-up artists for theatre, film and broadcast in Hollywood. Atelier Bassi was the only wig manufacturing company at this exhibition and received an enormous feedback. Top film producers and producers of well-known TV-series were excited about our products. Theatres and opera houses showed high interest. The enormous success in the USA had its impact on Europe and thus orders from the Metropolitan Opera New York were door openers for other operahouses in France and Italy. As a result we started receiving orders for musical productions in New York and London, the personal wigmakers of famous actors and musicians contacted us and big Hollywood productions began to buy wigs and hairpieces from Atelier Bassi.

Atelier Bassi now also launched its own make-up line for special effects make-up under the name of „4Make-Up“. In 2003 I decided to make Bali my home destination where I conducted the production and development of manufacturing, while Giuseppe Abbate managed the business back in Switzerland. Just one year later I set up another production line for special effects prosthetics, under the name of „Tiga-D“. The success story of our aluminum case for make-up artists encouraged us to extend our manufacturing line to all kinds of bags and accessories under the name of „TasMerah“. In 2009 I finally founded Bali’s first professionally equipped film studio which is located directly next to the wigmanufacturing company. After Giuseppe Abbate left the company in 2010 I decided to turn Atelier Bassi into a corporation. Although we have grown into a large company we have still kept that personal customer policy. Every customer, regardless of size or importance, will be served with the same professionality and will enjoy the same individual advice.”